Hello there. I have at last revamped this damn website. It was a pain-in-the-ass project fueled by an especially delicious Thanksgiving dinner. I have also revamped my visual art portfolio website, so have a looksie there, too.

As 2018 enters its death throes, I feel I should contemplate, summarize and over-analyze. In some ways, I took a break this year. I came back from my CREACTIVE contract with a shoulder injury and spent the first few months of the year navigating the bullshit that is the American health care system. I was finally diagnosed with a SLAP III lesion in my left shoulder and then I spent the next few months agonizing over whether or not I should move forward with surgery…and woah, before I knew it, half the year was gone. In the end, I decided not to undergo surgery. I wasn’t happy with the proposed “fix” and since I was experiencing virtually no pain, just weakness, I opted for more physical therapy.

And what do you know, I’ve gotten stronger. I won’t be doing any crazy one-arm nonsense on straps, but do I do straps? No. Do I want to do straps? Also no.

During this time of torment and uncertainty, I did three things: worked 25 hours a week at a desk job (which you know what, it has been pretty dang nice), taught a bunch of classes at Aloft Circus Arts, and created a new act on aerial sling, an apparatus I barely understood, having been on a sling a grand total of maybe two times before then. 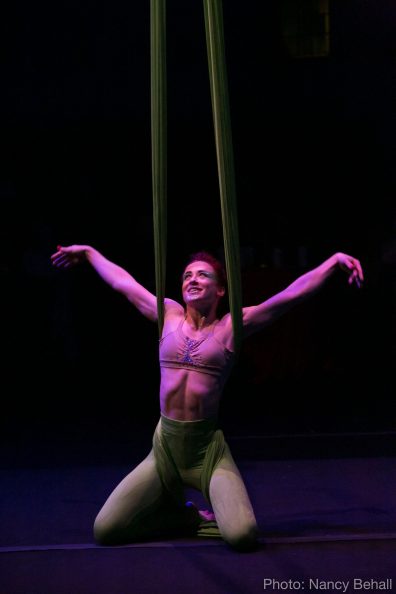 The “Monstrous Madame Mantis” sling act is part of the reason I’ve gotten stronger: dubbing it “squishy trapeze”, I attempted to do as much as I could with the same dynamic movement as I do on trapeze. This proved extremely difficult, and I think I’ve been moderately successful, but boy oh boy, now when I get on a trapeze, I have twice the power I did before!

I also developed a short act on a teeny, tiny hoop, and in doing so, I’ve learned some new things about spinning that I can now apply to dance trapeze. It seems that leaving my comfort zone of trapeze and exploring other things has been rather beneficial. Shocking.

I also taught workshops and performed in Edmonton, Canada, at the Firefly Circus Academy in June and later in November, I returned after four years of absence to Champaign, Illinois, to teach workshops at Defy Gravity. For those of you who don’t know, Champaign has been a recurrent destination in my life and an especially significant one for my career in aerial arts. I graduated from the University of Illinois in 2006 and then I returned there in 2013, relocating from Chicago to be with my now-ex boyfriend. I found myself completely isolated from other aerialists during that time and decided that I would teach trapeze out of a gymnastics school. I made some wonderful friends and the experience pushed me to fully commit myself to a career in aerial arts.

So, here I am, as 2018 draws to a close, wondering what the next step should be. A list of possibilities and goals:

As I slither forward into the new year, I’m going to try to remember one thing, something that my friend and former coach once told me:

It’s all about molting, becoming something new, without expectations.